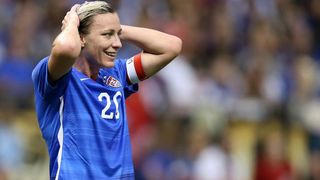 United States forward Abby Wambach suffered a 1-0 defeat in her last game as a professional footballer on Wednesday.

USA went down 1-0 to China in an exhibition game at the Superdome in New Orleans.

Wang Shuang scored the only goal of the game on 58 minutes to condemn USA to a first loss on home soil in over 10 years.

The 35-year-old announced her retirement in October after a 14-year career for the women's national team.

Wambach is one of USA most decorated players - having lifted the 2015 Women's World Cup as well as receiving the 2012 FIFA World Player of the Year.

Speaking after the game, an emotional Wambach said: "I think it’s pretty fitting that I played 70 minutes and we weren’t able to score a goal.

"It’s like, OK, maybe it is time for me to go. These younger players have so much to look forward to and I’ve been the blessed one for so many years to be a part of this team.

"The team is in their hands now."

Wambach made over 250 appearances for USA and scored 184 goals, but was unable to find the net in her swansong.