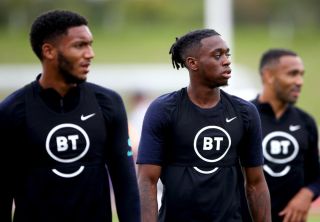 Aaron Wan-Bissaka’s first taste of the England senior set-up has ended prematurely due to a back issue.

The 21-year-old has settled in impressively at Manchester United since his summer arrival from Crystal Palace for a fee that could rise to £50million.

Wan-Bissaka’s form saw him rewarded with a maiden senior call-up for September’s home Euro 2020 qualifiers against Bulgaria and Kosovo, but injury has led to his early departure from Gareth Southgate’s squad.

A statement from the Football Association read: “Aaron Wan-Bissaka has withdrawn from the England squad.

“The Manchester United right-back has returned to his club due to a back issue.

Wan-Bissaka trained at St George’s Park with the England squad on Monday and United have described this issue as an “injury blow”.

Southgate kept close tabs on the talented right-back last term and he swept up at Palace’s end-of-season awards, only to endure a torrid time at the Under-21 European Championship with Aidy Boothroyd’s Young Lions.

Wan-Bissaka has responded well to that disappointment yet eyebrows were still raised when World Cup semi-finalist Kyle Walker was omitted from the senior squad, with Alexander-Arnold and the rejuvenated Trippier also selected.

“We tracked him very closely last year, and we thought he had an outstanding season last season, but we wanted him to stay with the Under-21 group,” Southgate said at the squad announcement.

“He’s adapted very well and very quickly to a high-profile move. And playing in front of 70,000 fans, that brings intensity and pressure.

“We’re looking at him and Trent and that’s the reason on this occasion that Kyle Walker isn’t with us, we feel it’s an opportunity in particular to have a look at two young players.

“We talked about the number of games we’ve got ahead of next summer.

“We think we need to see them quickly and we also wanted to reintegrate Kieran Trippier back into the group just so he knows that he’s still on our radar, and he’s obviously had a big – a huge – move to Atletico Madrid, frankly, that kind of goes under the radar a little bit here and he’s started the season really well.

“So, it is an area of the pitch where we have a lot of quality.

“Kyle has started the season really well, so I’ve explained to him the rationale for the thinking. It’s not the case that he’s not playing well for Manchester City – it’s quite the opposite.

“So, yes, that is an area of the pitch with some really good, and four very different, options.

“They all have completely different strengths, and we’re looking forward to helping some of them develop.”