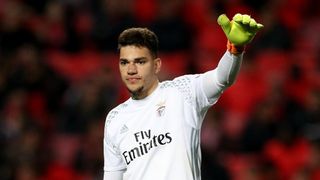 Ederson has suggested he has played his last match for Benfica, with the 23-year-old goalkeeper having been strongly linked with a move to Manchester City.

The stopper helped Benfica to complete a domestic double by claiming the Taca de Portugal with a 2-1 win over Vitoria Guimaraes on Sunday to follow up their Primeira Liga title.

But the Brazilian hinted he is on his way out of the club, with City reportedly close to signing the goalkeeper.

"I still don't know, but this was probably my last game for Benfica," Ederson told Portuguese outlet RTP after the cup final.

City are seeking a new goalkeeper after allowing Willy Caballero to leave the Etihad Stadium at the end of his contract, while Chile international Claudio Bravo has struggled to impress after signing from Barcelona.

Pep Guardiola has already brought Monaco forward Bernardo Silva to City and Benfica are reported to want a fee in excess of the £32.6million fee Juventus paid to Parma for Gianluigi Buffon in 2001, which would make Ederson the world's most expensive goalkeeper.

Coach Rui Vitoria is expecting Ederson to leave the club, telling reporters: "If Ederson leaves, he leaves with the gratitude of Benfica. He will always carry Benfica's name everywhere."