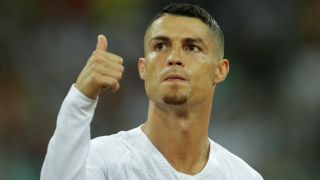 Having arrived to a throng of frenzied supporters, Cristiano Ronaldo has now received his most enthusiastic Juventus welcome yet – from Patrice Evra.

Ronaldo, who played alongside Evra at Manchester United, signed a four-year contract with the Serie A champions after they paid Real Madrid a reported initial fee of €100million.

The full-back, who also spent two and a half seasons with Juve, took to Instagram in Bianconeri colours to serenade the Portugal superstar with a rendition of Con Te Partiro, the Italian song made famous by Andrea Bocelli.

Although Con Te Partiro – released in English as Time to Say Goodbye – is ironically more about farewells than welcomes, there is no confusing Evra's excitement at his former team-mate's move to Turin.

"Juventini, you have the best player in the world," Evra sings over the music, before offering Ronaldo some advice on the challenges he will face from the club's eager young players in a traditional pre-season match.

"I know, Ronnie, you have won five Ballons d'Or but at Juve you have to work [hard] like this!" he warned.