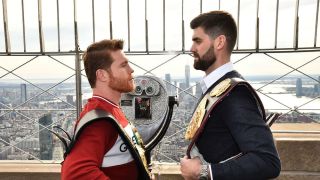 Former England captain Wayne Rooney is hoping Rocky Fielding can pull off a huge shock and take down Saul 'Canelo' Alvarez on Saturday.

And Rooney, who now plies his trade in the United States with DC United, is backing fellow Merseyside native Fielding as he defends his belt.

In a video message posted on his Twitter page, Rooney said: "Alright, Rocky. I just want to say a massive 'good luck' in your fight against Canelo at Madison Square Garden.

"The whole of Liverpool is behind you and we're proud of you. All the best, mate."

A massive good luck to who fights Canelo at this weekend December 12, 2018