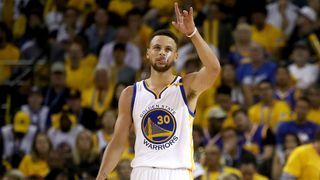 Whether it is on a basketball court or football pitch, Golden State Warriors star Stephen Curry can do it all.

He is a two-time NBA MVP and two-time champion, but Curry took his skills to Stamford Bridge on Sunday.

After watching Premier League champions Chelsea play out a goalless draw against London rivals Arsenal, Curry showed he is handy with a ball at his feet as he scored a penalty.

While he had some help from the goalkeeper, Curry may have a career in football if that basketball thing does not work out.

I'm nice with the right foot though...thanks to for having me at Stamford Bridge today. September 17, 2017

Curry, who averaged 25.3 points, 6.6 assists and 4.5 rebounds during Golden State's championship-winning 2016-17 campaign, has been enjoying football in the off-season.

The 29-year-old was in attendance to watch Neymar and Paris Saint-Germain in Ligue 1 last month – the French giants defeating Saint-Etienne 3-0.