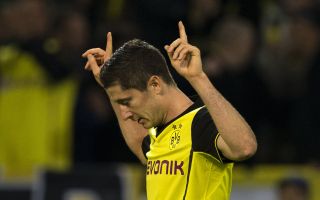 Striker Lewandowski is to leave Signal Iduna Park following the culmination of the 2013-14 campaign and will link up with Bundesliga rivals Bayern Munich after agreeing a five-year deal with the Bavarian outfit.

Dortmund spent heavily in the close-season, bringing in the likes of Henrikh Mkhitaryan and Pierre-Emerick Aubameyang to fill the void left by Mario Gotze, who departed for Bayern in July.

And the eight-time German champions are poised to enter the market once more as Jurgen Klopp's side aim to bridge the gap between themselves and Bundesliga leaders Bayern next season.

"We must, we want to and we will invest in the summer," chief executive Hans-Joachim Watzke told Sport Bild.

Dortmund are currently 12 points off Bayern in fourth place in the Bundesliga and resume action on January 25 with a home tie against Augsburg.

Having lost last season's UEFA Champions League final to Bayern, Klopp's side continue their European campaign against Zenit St Petersburg in the round of 16.