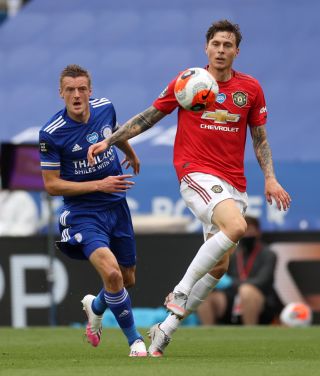 Victor Lindelof is confident Manchester United can achieve “great things” in Germany after edging past FC Copenhagen to reach the Europa League semi-finals.

A year on from kicking off a strange, energy-sapping 2019/20 season, Ole Gunnar Solskjaer’s men required extra time to overcome the Danish Superliga runners-up on a sweltering night in Cologne.

Bruno Fernandes’ spot-kick was enough to secure a 1-0 win and progress to the semi-finals of the Europa League mini-tournament, with Premier League rivals Wolves or Spanish side Sevilla lying in wait back at Stadion Koln on Sunday.

United centre-back Lindelof told the PA news agency: “It was a tough game but we came through in the end and we’re happy for that.

“I mean, we knew what kind of team they were and I think they made it difficult for us, even if we didn’t play at our level.

“I think we could have done a lot of things better but when we had the ball they made it difficult for us.

“Sometimes they pressed high and when they didn’t they dropped deep and defended compact as a unit.

“It was hard to create some chances there but I think we should have scored a few more goals.”

Asked why they were below par, Lindelof said: “It’s very difficult to say just why. It happens sometimes football.

“Of course it’s been a long season but we played a quarter-final in a European cup so I think everyone had to be ready for that.

“Like I said, it happens sometimes in football that you don’t perform at the level you want to.

“But the important thing is that we won and we’re through to the semi-finals.”

United saw a penalty overturned, two goals disallowed and a variety of efforts come back off the woodwork during a goalless 90 minutes, before Fernandes scored what proved to be a decisive extra-time penalty.

But Ole Gunnar Solskjaer’s side will know how much they need to improve if they are to progress past Wolves or Sevilla and reach the Europa League final.

“I think we have a lot of confidence in the team right now,” Sweden international Lindelof said. “We’ve been performing on a very high level, especially after the league ended.

“We got the third spot and we’ve been some performing some really, really good football.

“I think everybody has a lot of confidence and we know we can do some great things.

“Obviously even if we play against Sevilla or Wolves, they are two tough teams but we’re going to be ready and hopefully we can go out and perform a really, really good game.”

The Europa League offers the opportunity to cap a promising campaign with Solskjaer’s first silverware in the Old Trafford hot seat.

And with United having bowed out at the semi-final stage of this season’s Carabao Cup and FA Cup, Lindelof is hoping third time’s a charm.

“It’s always been our goal to win this competition and we want to go through to the final,” said the centre-back, who was introduced as a second-half substitute on Monday evening.

“We’ve been playing a few semi-finals this season and hopefully we can win the next game and get through to the final. That has always been our goal.

“(The other semi-finals) are completely different games but obviously we need to be ready because we know we’re going to play against Wolves or Sevilla, who are very good teams.

“We have to be ready from the start and be on our toes to perform.”

United’s focus is on rest, recovery and preparation in Cologne, where coronavirus precautions mean they have to stay locked down in a bubble.

“I think it’s going to be fine,” Lindelof said before being whisked back to the team hotel.

“I think all the players have been playing tournaments. I’ve been away playing the World Cup, the Euros and everything.

“Even if we’re not able to leave the hotel at the moment, we have things to do there so I think it will be fine. No problem at all.”