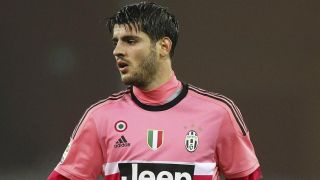 Juventus have "no intentions" to enter negotiations with Real Madrid over the sale of Alvaro Morata, according to sporting director Giuseppe Marotta.

Morata, who joined Juventus from Madrid in 2014, has only found the back of the net once in 18 league appearances this season.

Reports have suggested Morata has a buy-back clause from Madrid in his contract, and the Spanish giants may be looking at bringing the 23-year-old back to the Santiago Bernabeu.

However, Marotta insisted Juventus will not be selling Morata to any club in the near future.

"As far as we are concerned, there is no intention to start a negotiation with Real or with another club," he told Mediaset Premium.

"He’s a cornerstone of this team, he’s a youngster who has become a champ. We usually keep these kind of players.

"Our goal is to observe and sign those young players who can represent today’s and tomorrow’s football."

Marotta did hint at some movement in January, with the club hoping to complete a deal for 18-year-old Genoa midfielder Rolando Mandragora.

"We hope to carry out in the next hours the negotiations," he said.