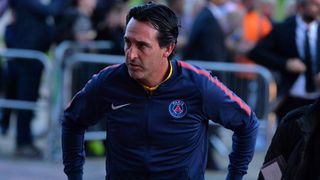 Unai Emery is refusing to get carried away by Paris Saint-Germain's chances in this season's Champions League, despite the additions of Neymar and Kylian Mbappe.

The big-spending Ligue 1 giants - who suffered a remarkable collapse against Barcelona in the last 16 of the previous campaign - travel to Celtic for their Group B opener on Tuesday.

PSG will be expected to qualify from a pool that also includes Anderlecht and Bayern Munich, albeit the pressure is on this year to do more than just reach the knockout stages.

While acknowledging he has a squad capable of going far in the competition, Emery's only focus right now is finding a way to silence a raucous home crowd at Celtic Park.

PSG players get a look at the Celtic Park pitch. It's a real beauty, ! Should be a good one tomorrow!! September 11, 2017

"We want to take it step by step. We start with a lot of motivation and responsibility, and we have great players, a great team," Emery told a media conference.

"We want to keep moving forward. The goal for me is to evolve step by step.

"All teams deserve to be there. This Celtic is a great team.

"They are used to winning, have many international players and are used to playing high intensity matches. They also play with great intensity at home."

PSG will be without injured duo Angel Di Maria and Javier Pastore as they take on a Celtic side who held Manchester City to a thrilling 3-3 draw at home last year.