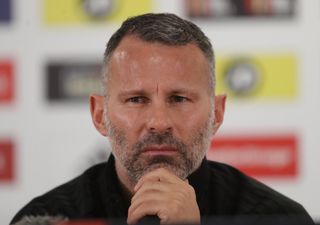 Ryan Giggs is still planning on Wales travelling to Helsinki next week, even though the game may not be played there because of Finnish coronavirus quarantine rules.

The Nations League opener is only nine days away and no venue has yet been confirmed by UEFA, with the apparently growing possibility that it could be moved to a neutral country.

Finnish regulations state people entering the country from the UK must quarantine for 14 days, although exemptions can be made by the federal government.

Doubts over the game being played in Helsinki on September 3 rose when Finland cancelled their squad announcement on Tuesday morning, with Football Association secretary general Marco Casagrande saying there had been no decision from the government over easing the regulations.

“At the moment we’re preparing for the game a week Thursday in Finland. If anything changes we’ll have to adapt.”

In a statement on the Finland FA website, Casagrande said: “We have not yet received decisions from the authorities regarding the restrictions on the exemptions we have applied for.

“So at this stage we will not be able to tell you more about the matches or the players’ access to them.”

Finland also delayed naming their Under-21 squad on Tuesday and said that a new date for the press conference would be announced “as soon as possible”.

As far as Giggs’ squad is concerned, Euro 2016 hero Hal Robson-Kanu returns to the international fold after a nearly three years away, while there are first senior call-ups for Neco Williams and Ben Cabango.

Robson-Kanu won the last of his 44 caps against the Republic of Ireland in October 2017 and has not played under Giggs.

The West Brom striker retired from international football in August 2018, but he reversed that decision late last year and Giggs has now included him in his plans with the postponed European Championships just over nine months away.

“I never closed the door on Hal,” Giggs said. “I spoke to Hal before what we thought were going to be the games in March.

“Ever since he decided he didn’t want to be up for selection I kept in touch with him. I said things may change, which they have, and he’s in a much better place.

“He’s playing regularly for West Brom and playing well and I was keen to get him back in the fold because he adds something different to what we’ve got.”

The 19-year-old played enough games to get a Premier League winner’s medal but it had been reported that England were monitoring him due to his dual qualification.

“I’ve been in communication with Neco and he wanted to play for Wales,” Giggs said.

“I think he’s got the most Wales Under-19 caps and he’s come through the system. He’s proud to play for Wales and I can’t wait to work with such an exciting player.”

Veteran defenders Chris Gunter, Wales’ most capped player with 96 appearances, and Ashley Williams are both retained despite both being without a club at present.

Gareth Bale, who played just 48 minutes of Real Madrid’s 12 post-lockdown games, and Juventus playmaker Aaron Ramsey are included, while Bournemouth forward David Brooks features in a Wales squad for the first time in 14 months after injury.

But Chris Mepham, Joe Allen and Joe Rodon miss out through injury and Neil Taylor, Tom Lawrence and Sam Vokes are all omitted.