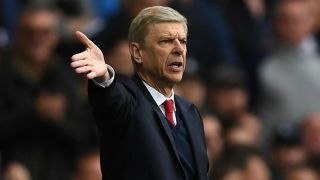 Arsenal manager Arsene Wenger says he will give away his FA Cup winners' medal even though victory would make him the most successful manager in the competition's history.

The Gunners face Chelsea at Wembley on Saturday as they look to claim their third FA Cup in the last four seasons and seventh overall for their manager.

That would give Wenger the outright record, which he currently ties with former Aston Villa boss George Ramsay.

Chelsea, meanwhile, are eyeing a double and first Cup crown since 2012, but Wenger will not be keeping any memorabilia if Arsenal can stop their rivals.

"I have no medals at home from anything," the Arsenal boss told reporters.

"You come to my home you will be surprised. There is no trophy, no medal, nothing.

"I give them always out. There is always a guy at the club who did not get a medal, a member of staff so I have given it to him. So you are always a medal short and you will always find someone who takes it.

"I am not a back-looker. I am always forward. At home you would not even guess that I am a football manager, apart from the fact that a football game is on.

"I have memories of the human beings, human experiences. That is more shared emotions and things like that."

Footballers by trade, but and aren't bad in front of the camera eitherWatch it all May 26, 2017

Arsenal are under pressure coming into the game, having failed to qualify for the Champions League for the first time in 20 years.

Wenger must cope with a selection crisis in defence, with Laurent Koscielny suspended, Gabriel injured and Shkodran Mustafi doubtful – meaning Per Mertesacker is set to make his first start in over a year.

Despite those issues, Antonio Conte has claimed Arsenal are favourites, a stance Wenger laughed off ahead of the match.

Wenger said: "Chelsea think we are favourites? He can think what he wants.

"If he can justify it during the game it is even better.

"I expect us of course to win. But it is true that Chelsea in the neutrals' opinions might be the favourites."

Wenger is out of contract at the end of the season and has not announced whether he will be extending his stay at the Emirates Stadium, meaning the Wembley clash could be his last game as Gunners boss.