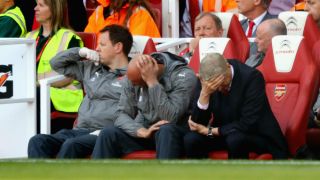 Arsene Wenger hailed the professional attitude of his players amid a turbulent end to the season but was again hesitant to answer questions regarding his own Arsenal future.

The Frenchman is nearing the end of his contract, but is yet to make public his decision over his plans thereafter.

Sunday's 3-1 success over Everton was not enough to secure Champions League qualification, as Manchester City and Liverpool's victories over Watford and Middlesbrough mean the Gunners finish fifth and miss out on a place at European club football's top table for the first time under Wenger.

Wenger conceded his own contractual speculation had been a hindrance during Arsenal's run in, but failed to place any blame at the feet of majority owner Stan Kroenke, who was the target of supporters' ire at Emirates Stadium on Sunday.

"Of course you can look everywhere for where we dropped these points, but since January it's been a very difficult environment for different reasons," Wenger said.

"Some you know about, and that's very difficult for a group of players to cope with that. There are some other reasons that we will talk about another day.

"Psychologically, the environment for this group of players was absolutely horrendous and I'm very proud of what they have done, the way they responded and finished the season.

"You respect everybody in life and I respect Stan Kroenke a lot. He's not at fault if we didn't reach the Champions League, it's the technical department who are responsible for that. I don't see what he has to do with that.

"You have been at the games and you cannot say that the environment for the players was especially positive. What is important is we do our job. We are professional people and part of being professional is as well to perform when the environment is not positive. We have not to look there as well as an excuse, but I just say it’s a fact - it doesn't help. Maybe that point could…"

Wenger was quick to dismiss questions over his own plans at the end of the season, with the Gunners readying themselves for an FA Cup final date with Premier League champions Chelsea at Wembley on Saturday.

"Look, my personal situation is not so important," he said. "I care about this club, even if I leave one day, I will love this club until the last day of my life and I want this club to do well and that's all I care [about].

"It's not my personal situation, it's just how well the club responds next season. We won seven of the last eight games, despite a 'lack of clarity'. I think we have just to win the next one.

"I don't understand what you want to hear from me. My situation will be sorted out soon, so let's prepare for the cup final."