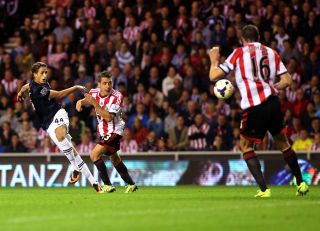 Januzaj hit the headlines with a match-winning brace for United against Sunderland on Saturday, and immediately the talk of his national allegiances went into overdrive - given the Brussels-born winger has Kosovar and Albanian heritage but has lived in England since early 2011.

In an interview with the English FA on Wednesday, Wilshere said he would not welcome Januzaj playing for England.

"If you lived in England for five years for me it doesn't make you English."

Wenger, who manages Wilshere at Arsenal, supported the 21-year-old's view.

"I agree with him (Wilshere). I always said also an Englishman should manage the England team," Wenger said.

"If we are not clear on that the national teams will become like a club."

Januzaj's club teammate Wayne Rooney said should the 18-year-old one day qualify for the English national team, it would not be the first case of players switching allegiances.

"He's a tremendous talent but is he from Belgium, or Croatia, or something?" Rooney said.

"I think someone said there's seven countries he could play for. But I think if the FA want to pick him you have to speak to the manager and the right people to speak to.

"I think England has a lot of different nationalities playing for other sport teams where the football team has been quite traditional and stayed with English players.

"A lot of other football teams have taken players from other nationalities."