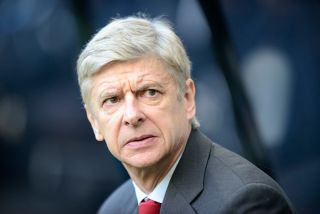 The Premier League leaders have been hit by several injuries to attackers in recent weeks, with Theo Walcott ruled out for the rest of the season after the England international ruptured the anterior cruciate ligament in his left knee.

There have been suggestions Arsenal will enter the transfer market, with Wenger himself confirming Walcott's injury had "accelerated his desire" to do business.

However, the Frenchman has refused to be drawn on potential targets and believes it would be fairer if there was no January window.

"The people who are in the newspapers do not help us to win the game (against Villa) on Monday night," he said. "It is the players who play here."

"The transfer market is a distraction that for me is not welcome. I think it would be much better that there is no transfer market at all in January and the team starts and finishes with the same players ... unless you have big injuries.

"For the rest what is important is that we focus on the quality of our performances because it's a period that is very sensitive at the moment and every game is now a massive game."

Arsenal have continually been linked with a loan deal for Real Madrid striker Alvaro Morata, but head coach Carlo Ancelotti has no interest in letting the 21-year-old depart the Bernabeu, and Wenger insists there have been no discussions with the Spanish club.

He added: "Nothing has changed because we are open to a possible solution and if something interesting turns up we will do it. It could be a loan as well, yes.

"We are not in talks with Real about anybody. I do not want to speak about any specific names. For us it is important to prepare well for Monday night and to win the game on Monday night."