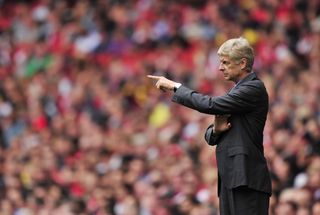 The London club had been strongly linked with moves for several high-profile names early in the window, with the likes of Luis Suarez, Gonzalo Higuain and Luis Gustavo all reportedly under consideration.

But with Suarez seemingly set to stay at Liverpool, and Higuain and Gustavo having opted to join Napoli and Wolfsburg respectively, 20-year-old forward Yaya Sanogo represents the only acquisition completed by Arsenal thus far.

However, Wenger is adamant that his players can have no excuses for their failure to earn a positive result in their Premier League opener at the Emirates Stadium.

"Could we have won the game with the players who were on the pitch today? That for me is the real question and I say yes," he said.

"If we do not spend money it's because we don't find the players. I'm not the only one to work on that, we are a team who works on that and we are ready to buy the players if we find that the players are good enough for us.

"We want our fans to be happy and when you don't achieve that you feel absolutely sorry and really disappointed. My job is to make the fans happy but we haven't lost the game because of (not signing players).

"We are on the market, everybody knows that we want to buy players but until we buy players we have to win football games. It's not an excuse not to have bought players to lose the game today.

"We work 24 hours a day for that and when you make a decision we take it seriously. We are not what people try to think we do not want to spend, we want, we are ready to buy players."

The Frenchman also lamented his growing injury list, with Bacary Sagna, Alex Oxlade-Chamberlain and Kieran Gibbs all picking up knocks during the game.

"Not only do we lose a game we have many injuries. It's unbelievable how many people are on the treatment table and we have to recover some players for Wednesday night," he added.

Arsenal have the chance to bounce back from their disappointment against Villa when they travel to face Fenerbahce in the first leg of the sides' UEFA Champions League play-off.