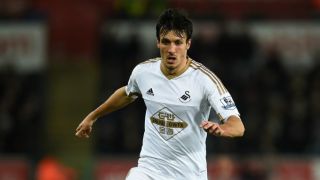 Swansea midfielder Jack Cork believes a win over West Brom would be massive as they look to make it three victories in a row and catch their opponents in the Premier League table on Tuesday.

The Welsh side have been in sublime form in recent weeks and saw off Watford 1-0 on January 18, before claiming maximum points with a 2-1 win at Everton last weekend.

Those results have seen them move away from the drop zone, with Swansea now sitting four points clear of danger in 15th with 25 points from 23 games.

Swansea can move level with West Brom on 28 points by defeating the Midlands club and Cork is under no illusions as to the importance of taking all three points.

"We needed the two recent wins because it gave us a real boost," he told Swansea's official website.

"No-one expected us to win at Everton, especially as we had never won there in the league. That result really raised confidence.

"When there is a lot of pressure on you it makes it harder to perform. But when you get two consecutive victories it eases that pressure significantly.

"For us it's a big game. Maybe people outside of this club won't think that, but we can go above them in the table if we win. That would be three wins on the bounce, and for us that would be massive."

Swansea have no major injury concerns ahead of Tuesday's contest and will fancy their chances of getting another good result, having won six of their previous nine games against West Brom and recorded a 1-0 victory in this season's reverse fixture

West Brom, meanwhile, have been struggling in recent weeks and have won just one of their last six games in all competitions.

One of Tony Pulis' side's biggest problems lies up front, with only Aston Villa (18) scoring fewer goals than West Brom (22).

Saido Berahino is one of West Brom's top goalscorers this season, netting six in all competitions - including a double in the 2-2 FA Cup draw with Peterborough United at the weekend.

Pulis, however, wants to see more from the 22-year-old.

"Saido is a goalscorer when you put him in front of goal," Pulis told reporters. "But he's not fully fit, he lacks sharpness and not as good as he was last year.

"We know he can do it and you can't take away the fact that he has a wonderful talent."

West Brom will have to make do without the services of Callum McManaman on Tuesday due to an ankle injury, while James Morrison is unavailable as well, with Chris Brunt (calf) and Darren Fletcher (knee) both doubtful.