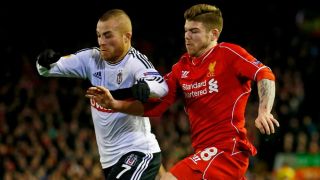 West Ham loanee Gokhan Tore will undergo a scan on Friday to determine the extent of an injury suffered in training.

Tore - on a season-long loan from Turkish outfit Besiktas - sustained a knee problem in a light session on Monday.

The winger then missed out on West Ham's 2-1 defeat to Slovenian side Domzale in their Europa League qualifying third round first leg on Thursday.

West Ham assistant manager Nikola Jurcevic says Tore requires a scan to determine how serious the injury may be.

"Tore has hurt his knee, but we are not sure how serious. It was a very easy training, but after five minutes he felt some pain in his knee," Jurcevic told the club's official website.

"He will have a scan on Friday and we hope it will not be serious."

The injury comes as another blow for the east London side, with Manuel Lanzini and Aaron Cresswell both sidelined.

Jurcevic says West Ham's hand might be forced, and a dip into the transfer market needed.

"Maybe we will possibly do something in the transfer market because we need some players in some positions, because Aaron Cresswell and Manuel Lanzini are injured and cannot play for a long time," he said.

"With Lanzini, we don't have exact information. He will come back from America, where he wanted to play in the Olympic Games for Argentina.

"We don't know, but we think he will not be fit for the next game against Domzale."