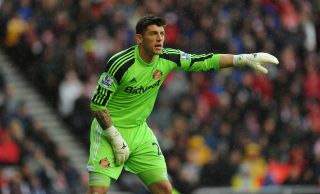 Sunderland picked up their first win of the season against their fierce rivals last time out, and face a Hull side desperate to get back to winning ways after three matches without victory.

The win over Newcastle lifted Sunderland off the bottom of the Premier League table and, although confidence is high at the Stadium of Light, goalkeeper Westwood knows Hull will provide them with a stern test on Saturday.

"It's not going to be easy - every game in this league is tough," the Republic of Ireland international told the club's official website.

"But we'll go there in great spirits, look to get the ball down and play and take the game to Hull.

"They started really well, have had some decent result and got some points on the board.

"The league is so tight at the moment - Hull are in 10th and there’s only three points between them and third-bottom.

"Hull are a good side. They've had some injuries but other players have come in and shown what they can do."

The 29-year-old has played every game in the Premier League this season but is yet to keep a clean sheet.

However, after another week working with new manager Gus Poyet, Westwood said the squad are hopeful of building on their maiden victory.

"We've been on a high this week and everyone is delighted," he added. "Hopefully this can kick-start our season.

"With the team and the talent we have, hopefully we can push on."

Sunderland have won their last six league meetings with Hull.