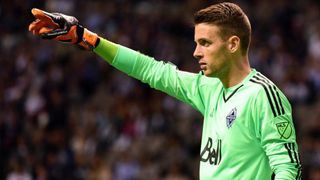 VANCOUVER — When it came to adding depth to their goalkeeping department for 2016, the Vancouver Whitecaps decided that "what’s old is new again."

A day before opening the season at home against the Montreal Impact, the ‘Caps re-signed Paolo Tornaghi to a one-year contract, with a club option for 2017.

The former Chicago Fire shot stopper opted to extend his time with the Blue and White after being unable to find a No. 1 role elsewhere. The former Italian youth international joined D.C. United for a trial at the start of preseason, which proved unsuccessful.

It prompted the 27-year-old to return to the familiar surroundings of Vancouver in early February to maintain his fitness, having spent the past two seasons backing up David Ousted. He is again expected to serve as cover for the Dane, having made his previous Whitecaps first-team appearances in the Canadian Championship and CONCACAF Champions League.

“Paolo is a true professional,” Whitecaps coach Carl Robinson said in a club statement. “The boys absolutely love him to bits and we’re confident in his abilities as a goalkeeper. He trains hard, has the right attitude, and is a role model for the younger goalkeepers in our club. We’re happy to have him back.”

“I’m happy to re-sign because I know what we’re building here as players and also as a club,” Tornaghi said. “I will continue to give my all for the fans, staff, and my teammates.”

With Tornaghi’s return, it remains to be seen if Canadian youngster Marco Carducci — who was No. 3 on Vancouver’s goalkeeping depth chart last season — will be loaned out to get regular playing time in 2016.