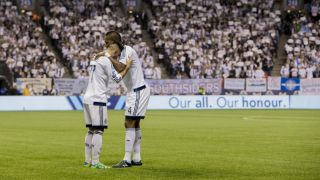 VANCOUVER – The wait for a new Vancouver Whitecaps season is nearly over, as Sunday will see the curtain raised at BC Place on arguably the most anticipated of MLS seasons on Canada’s west coast.

The Blue and White will again host Canadian opposition to begin the new campaign, with Montreal Impact travelling west to face Carl Robinson’s side and without the services of their Designated Player signing Didier Drogba.

Nursing a knee problem, the former Chelsea star is set to miss much of the first month of the new season as a precaution, with Montreal playing four of its first five league games on artificial turf.

While there may be some disappointment of a Drobga ‘no-show’ in Vancouver, Sunday is an opportunity for the Whitecaps to get the ball rolling on a season that offers plenty of promise.

“I’m super excited about the weekend, I really am,” Robinson said to reporters this week. “They’ve put a lot of hard work in from the start of preseason until now. If you don’t look forward to it or can’t look forward to it, there’s something wrong with you, there really is.

“The first game is always a special one against a rival of ours, which is a good team, and we know that as well. We’ll be ready, and it’s about going out and performing.”

A pleasant surprise for Robinson this preseason has been the progress of Vancouver’s young players. The former Wales international admitted his starting XI on Sunday might include a young face or two.

“I’ve got more young players fighting for spots than I thought would be, at this stage of the season,” he said. “Don’t be surprised if you see one or two young lads involved in the game on the weekend.”

Among the areas where the ‘Caps are keen to improve on in 2016 is their home form. Last season, BC Place was not a fortress for Vancouver, as they registered a less than impressive 9W-6L-2T record.

For left fullback Jordan Harvey, consistency is the key.

“I think we let ourselves down sometimes at home, but made up for that on the road,” he said. “I think now is just focusing on that form year in and year out. I think it’s got better and more consistent. Hopefully, it does this year.”

Though there will be no Drogba present, the Whitecaps are prepared for a season-opening battle with Canadian rival Montreal.

“They were a good team last year,” Whitecaps centre back Tim Parker said. “They really found a rhythm, and going into the playoffs, they really got hot. Obviously, with the names they have and the team that they have, it’s going to be an interesting fixture on Sunday.”

In advance of the new season, the Whitecaps announced on Thursday that former right fullback Young-Pyo Lee had returned to Vancouver to serve as a club ambassador. The former South Korean international played his final two years of a highly-distinguished playing career with the Whitecaps, making 65 league appearances during both the 2012 and 2013 campaigns.