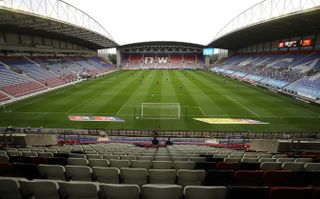 Wigan’s owner enquired about placing the club into administration before he had even completed his takeover, an independent panel has revealed.

Hong Kong businessman Au Yeung Wai Kay informed the EFL he had bought a 51 per cent stake in Latics on June 24, but had approached insolvency practitioners Begbies Traynor the previous day.

The club were subsequently placed into administration on July 1, incurring a 12-point penalty that ultimately led to their relegation to League One from the Championship.

The revelation is contained in the full written reasons for the decision to dismiss Wigan’s appeal against that punishment, which were published on Monday.

The legal team acting for Wigan’s administrators had argued the insolvency was a ‘force majeure’ event – something outside the club’s control arising from unforeseen circumstances – but this was rejected, despite the panel hearing the appeal expressing sympathy.

In reaching their verdict, the panel looked into the events which led to the administration.

Wigan were acquired by a company owned by Dr Stanley Choi in November 2018 and subsequently sold to another company, Next Leader Fund, of which Choi held a 51 per cent shareholding and Kay 49 per cent, in May 2020. Kay later bought Dr Choi’s 51 per cent interest for £20million, making him “in effect if not law, the sole owner of the club,” according to the report.

The report added: “It may seem extraordinary that, notwithstanding the deal which was to be completed the following day which resulted in him becoming, in effect, the sole owner of the club, Mr Kay had already contacted Begpies Traynor regarding putting the club in administration.”

The panel concluded the insolvency “cannot be regarded as a ‘force majeure’ event” as it is considered “a normal business risk that an owner will lose interest or run out of money and/or choose to deploy resources elsewhere”.

It added of the administration: “Far from acting with due diligence to avoid the happening of that event, at least one of the officials of the club – that is, Mr Kay – actively brought it about.”

The report, however, exonerated the club’s English-based officials, namely chairman Darren Royle, director Joe Royle and chief executive Jonathan Jackson, whom the EFL had suggested could have done more to avoid administration.

“We consider they acted with a commendable sense of responsibility towards the club,” the report stated. “We reject the suggestion by the EFL that they could and should have done more to prevent the club being put into administration.”

It added the financial issues were “actively concealed” by Kay.

Barnsley, who would have been relegated had Wigan’s appeal succeeded, were permitted to attend the hearing but their request to be paid costs to do so was considered “inappropriate” for an “observer”.

A suggestion Latics were put into administration because of a bet was considered “not impossible” but “wholly unsubstantiated”.