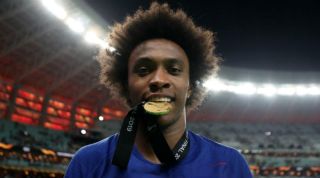 Barcelona will renew their long-standing interest in Chelsea winger Willian when the transfer window reopens in January.

The Blaugrana were again linked with the Brazil international this summer, 10 years after they first considered making a move for him.

Willian first came to Barcelona’s attention back in 2009, when he played against Pep Guardiola’s side for Shakhtar Donetsk in the Champions League.

However, the winger’s next stop was Anzhi Makhachkala rather than the Camp Nou, before he joined Chelsea in summer 2013.

Barcelona have been linked with Willian several times since then, but they have so far been unable to prise him away from Stamford Bridge.

However, the former Shakhtar star is out of contract next summer and could therefore be available for a cut-price fee in January.

Barcelona still admire the 31-year-old but they are slightly wary of his age, particularly at a time that the club are attempting to renew their squad and reduce its average age.

The Catalan outfit will therefore think carefully before submitting a bid for the Brazilian, who recently told the Evening Standard that he wants to stay at Stamford Bridge.

"From my side, I want to stay," he said last week. “I have one year left and I want to stay because I like to play for Chelsea. I love this club, I love to live in London and my family loves it here. I've been here six years already so everything is perfect for me.”

Willian scored his first goal of the 2019/20 campaign in Saturday’s 2-0 victory over Brighton, which was Chelsea’s first home win under Frank Lampard.

The Blues are next in action on Wednesday night, when they will be looking to bounce back from a 1-0 loss to Valencia by beating Lille in the Champions League.