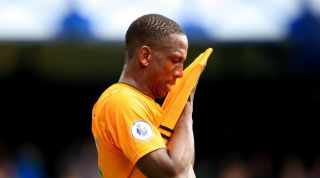 Questions about Arsenal's defence have loomed large for years, and now Wolves's Willy Boly has been touted as a potential saviour.

According to The Sun, Unai Emery has been looking at Boly after a shaky start from new signing David Luiz and Sokratis this season.

Boly was part of the Portuguese revolution at Wolves under Nuno Espirito Santo, signing for them on a season-long-loan from Porto when they were still in the Championship, and helping them to promotion that season.

He made his move permanent the following year for a fee of £10m, and has been practically ever-present in Wolves's favoured back three ever since.

Arsenal's defensive woes have been well documented this season. High-profile errors against Liverpool, Watford and Spurs have called into question the capabilities of Luiz and Granit Xhaka in particular, while Ainsley Maitland-Niles deputising at right-back hasn't convinced either.

The Gunners haven't kept a clean sheet in the Premier League since the opening day of the season when they beat Newcastle 1-0, in a game where the Magpies missed some glorious chances, and also have the worst record in the league when it comes to average shots conceded.

Looking at the stats, Boly would be an improvement on Arsenal's current pair. According to WhoScored, he leads both Luiz and Sokratis in tackles, interceptions and clearances, as well as dribbles and key passes.

Emery does have three senior defenders on the road back from injury - Rob Holding, Hector Bellerin and new signing Kieran Tierney. Calum Chambers has also been impressive when given the chance this season, scoring in the comeback victory over Aston Villa and picking up an excellent assist for Gabriel Martinelli in the Carabao Cup game against Nottingham Forest.

However, they are still light, having also lost Nacho Monreal and Laurent Koscielny in the summer. Shkodran Mustafi is their other defensive option, but he was publicly made available in the summer and will have to do a lot to work his way back into the first team.