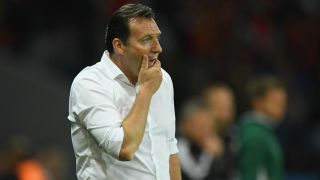 Marc Wilmots says his defence showed their inexperience against Wales as Belgium bowed out of Euro 2016 in the quarter-finals after a 3-1 defeat.

Belgium took an early lead through Radja Nainggolan but forfeited the initiative to Wales, who punished them with three goals to seal a historic win.

But despite the result, Wilmots said the tactical approach was sound as he suggested injuries - particularly in defence with Jan Vertonghen ruled out - and a lack of experience proved costly.

"We had a good strategy, we dominated, had an excellent 25 minutes but from nowhere we dropped 15 metres back. I was waving my arms, shouting," he said.

"I'm not a magician. You can't simply replace experience and my defence had an average of 23 years old. I can't blame the players but they need to be a well-oiled machine. We had to replace 50 per cent of our backline, I can understand us conceding goals from set-pieces.

"Perhaps it was fear, because they are young. I don't know. But I'm in charge of the team and that's the best I thought we had.”

Wilmots acknowledged that Belgium were one of the sides rated as a big chance of making the final and perhaps even winning it – even more so after they avoided the likes of Italy and Germany in the knockout stage.

"We had the core of the team and took the risk to bring in young players - they have a lot of potential, I'm not going to kill them," he said.

"We were listed among the teams who could have gone all the way. We wanted to go further and of course the players are left with a bad taste. We made too many mistakes to win this match against a very good Wales side – they know how to play football and have good talent."

And while the Belgium coach now faces a big battle to keep the top job, he remains undecided on his future.

"I said I'd make my decision after the championships, not straight after the game. I'm going to think about it. Give me time," Wilmots said.