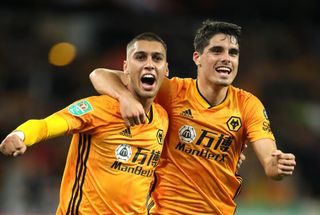 Wolves beat Reading 4-2 on penalties after a dramatic 1-1 Carabao Cup draw that saw the home side have two players stretchered off and finish with 10 men.

Debutant Bruno Jordao put Wolves ahead but was carried off injured before half-time after a challenge with Charlie Adam.

Lucas Boye headed Reading level in the ninth minute of time added on after substitute Meritan Shabani – another Wolves debutant – had also left the field injured.

Wolves progress to round four of the @Carabao_Cup after a 4-2 penalty shoot-out win over @ReadingFC.— Wolves (@Wolves) September 25, 2019

In the shootout, captain for the night Ruben Neves, Jesus Vallejo, Ryan Bennett and Ruben Vinagre kept their nerve to score for Wolves, while John Swift’s effort was saved by John Ruddy and Boye ballooned over the bar.

With Jordao and Shabani off and all three substitutes used, Wolves ended the game with 10 men.

The inclusion of Jordao and Neto were two of 10 changes head coach Nuno Espirito Santo made for Wolves, the same number as counterpart Jose Gomes.

Reading created the first chance when Boye turned Vallejo at the far post before crashing a fierce shot that flew straight at Ruddy.

Wolves’ first serious attempt came when Patrick Cutrone managed to get a left-foot shot in from an acute angle and goalkeeper Joao Neves Virginia parried.

The home side thought they had a penalty shout in the 20th minute when Neto tumbled under challenge from defender Tyler Blackett.

But referee Peter Bankes instead booked the Italian for diving.

Seconds later, Wolves midfielder Morgan Gibbs-White should have done better when he found himself in a good position but scuffed a trickling shot straight at Virginia.

Wolves had been on top for most of the game and took a deserved lead through Jordao.

The Portuguese midfielder took a square pass from Neves and unleashed a low drive from 20 yards that should have been an easy stop for Virginia but the Reading keeper inexplicably allowed the ball to go through his hands and trickle into the net.

But Jordao’s night was to end prematurely and in worrying fashion when he was stretchered off in the 41st minute.

He went down apparently holding his right shin after a challenge from Adam and was replaced by another debutant, Taylor Perry.

Reading went close to equalising in the 69th minute when Yakou Meite’s goalbound header was nodded off the line by Bennett.