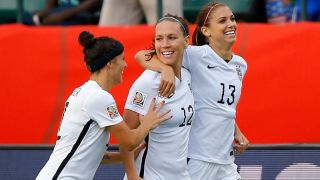 United States advanced to the quarter-finals of the Women's World Cup with a 2-0 win over Colombia, who finished with 10 players.

After a scoreless first half, USA pilled on unanswered goals via Alex Morgan and Carli Lloyd as the two-time world champions made the most of their numerical advantage on Monday.

Colombia goalkeeper Catalina Perez conceded a penalty and saw red for a rash challenge on Morgan in the 47th minute at Commonwealth Stadium in Edmonton.

Abby Wambach missed the ensuing penalty after sending her spot-kick wide, but USA were not to be denied six minutes later, when Morgan fired a shot past substitute keeper Stefany Castano.

USA were awarded another penalty in the 66th minute following a foul on Megan Rapinoe, and Lloyd made no mistake as the Americans earned a quarter-final showdown with China on Friday.

England joined USA in the last eight thanks to a hard-fought 2-1 win against Norway.

Norway - the 1995 champions - hit the front nine minutes into the second half after Gulbrandsen headed in off the crossbar from Lene Mykjaland's corner.

England were back on level terms seven minutes later, when Houghton's header from Fara William's cross deflected in off the upright.

Bronze completed the comeback in the 76th minute with a powerful strike from outside the area.

England will face host nation Canada in the quarters on Saturday.