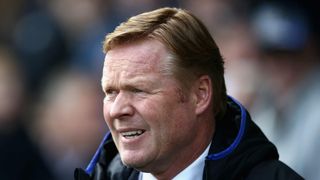 Ronald Koeman concedes he is "worried" by Everton's recent form and will consult his senior players in a bid to find a solution.

The Toffees have failed to win any of their last five games in all competitions, not scoring in their last three, and were hammered 3-0 by Atalanta in the Europa League on Thursday.

Next up is a trip to table-topping Manchester United on Sunday and Koeman is hoping a meeting with certain members of his squad on Friday will provide answers on how they can turn their slump around.

He told reporters: "I'm worried after what I saw yesterday.

"I wasn't worried after Chelsea [a 2-0 defeat on August 27]. The reaction should have started in the second half against Tottenham [last weekend].

"But that and the first half against Atalanta is enough reason to be worried.

"We had a bad run for a time last season, and I have confidence we can get out of it. We have one point less from last season from the same games v Chelsea, Man City and Tottenham.

"But yesterday was a wake-up call.

"After this press conference I'll have a meeting with the key players. It's time for the experienced players to stand up."

Koeman lost Romelu Lukaku in the close season but invested the money received from United in re-shaping his squad and has called for patience while the players adapt to life at Goodison Park.

"Maybe it's easy to tell everybody that Everton would be fourth in the table and will fight for the Champions League because they have spent a lot of money," he said.

"But maybe the rest of the teams have spent even more money. And they didn't spend it because they already had the team they wanted.

"Our team is in transition. Everybody knows young players and foreign players coming to the Premier League need time.

"At big teams, these players get a year to adapt. And that's what we need [with some players]."

Koeman will need to find a way to combat the threat posed by Lukaku, who has made a flying start to his United career, at the weekend.

"We know him really well. He is a great finisher, and I hope we know how to defend him," he said.

"In the box he is dangerous, fast and strong. If we defend like we have in the last few games, maybe it's his afternoon!"