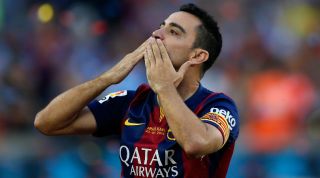 Xavi currently caoches Al-Sadd in Qatar, but is is hopeful of a return to Catalonia in the future.

With Ernesto Valverde under increasing pressure at Barcelona after a weak start to the campaign, the Blaugrana's manager role may become vacant sooner rather than later.

Barça are said to hold an interest in Sterling, but are yet to make any formal approach.

However, according to the Daily Mail, the Spanish club would up their efforts if Xavi were to take over.

The Barcelona hero recently praised Sterling in a conversation about the players most likely to take over from Lionel Messi and Cristiano Ronaldo.

"You look at young players who can be crowned the future best in the world and you still think of Neymar, Mbappe, Salah, and of course Sterling. I look at the moment - and Sterling is winning that race," he said.

Despite being comfortable at the Etihad, it's understood that Sterling would be open to playing abroad.

However, City won't be easy to negotiate with and could demand over £150 million for their prized asset.

Barcelona are not the only Spanish side who could target Sterling, however: Real Madrid boss Zinedine Zidane is a long-term admirer has publicly declared his interest in the past, saying in 2015: "Of course we are monitoring him as a player."

With the Englishman having blossomed since then for club and country, Zidane is unlikely to have changed his stance.

Sterling will be in action against when Manchester City visit Everton in the Premier League on Saturday evening.

9 of the weirdest players awards we've seen in football