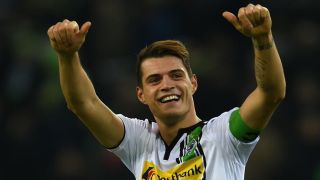 Borussia Monchengladbach sporting director Max Eberl has suggested that Granit Xhaka could depart the club at the end of the season.

Xhaka has become an integral part of the Gladbach midfield since his arrival from Basel in 2012 but has regularly been linked with a move away.

Several Premier League clubs, including Arsenal, Liverpool and Chelsea, as well as Bundesliga giants Bayern Munich, have all been credited with interest in the 23-year-old, who this week confessed to being open to a transfer.

Eberl admits the 39-times capped Switzerland international could be the next name on that list by the end of the campaign, but believes the club can remain competitive by buying a replacement intelligently.

"We have lost players like Reus and ter Stegen, Kruse and Kramer. In the summer perhaps Granit Xhaka will go," he told Sport Bild.

"We need a good mix between buying and selling to take the next step.

"After four successful years, we are not yet on a par with Bayern, Dortmund, Leverkusen, Schalke and Wolfsburg."