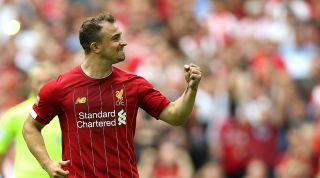 The Switzerland international has not appeared in any of Liverpool's first three matches in 2019/20.

Signed from Stoke last summer, Shaqiri was a bit-part player in his debut season on Merseyside.

However, Klopp is adamant that the former Inter man has a role to play this term.

"Shaq is training well. In training Shaq doesn’t have to show anything special in any way. He just has to keep his level. We need him, he knows that," Klopp said ahead of Saturday's trip to Burnley.

“Is he the happiest player? I don’t think so. Does he show that? No.”

Liverpool will be looking to make it four wins from four when they travel to Turf Moor on Saturday.