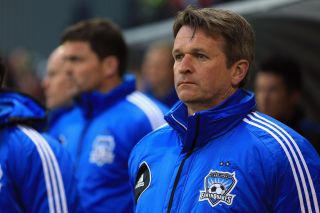 And in a statement on the Fire's official website, he said: "This happened very quickly. I'm very excited about the opportunity to be joining the Fire, a great organisation and just working with (owner) Andrew (Hauptman).

"He's the one that really pushed it and made sure we're going in the right direction. I'm very excited to get going. I can't wait to get to work and I'm really looking forward to the opportunity."

Hauptman added that Yallop is of sufficient calibre to improve the club's fortunes, adding that his experience will stand them in good stead.

"I'm incredibly excited to be welcoming Frank Yallop as the new head coach of the Chicago Fire Soccer Club," he said.

"I have an enormous amount of respect for him - I've had the pleasure of getting to know him over some time and I have a real confidence in his soccer acumen.

"I have faith in his history in building incredible team spirit with all the clubs he’s been with. He has an impressive depth of experience and that’s exactly what the club needs."