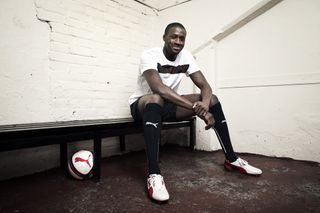 Title winners in each of the last two seasons, the rivals lock horns at the Etihad Stadium on Sunday both on seven points from their opening four games.

Both sides tasted victory in their arch rivals' back yard last term. Sergio Aguero's solo goal sealed a 2-1 win for City at Old Trafford after Robin van Persie's free-kick had snatched all three points at the Etihad Stadium last December.

Neither started 2013/14 as favourites to lift the title with Jose Mourinho back in the Chelsea hot seat, while Liverpool currently top the table after their unbeaten start.

Nevertheless, the Ivorian powerhouse, speaking exclusively to FourFourTwo, believes City vs United has grown to become the country's showpiece fixture.

"I think it is, yeah [now the biggest game in English football]," he said.

"Arsenal, Spurs, Chelsea and Liverpool are still big clubs but the passion for the clubs in this city is immense.

"We want to get our trophies back after a disappointing year and prove that we’re back on top. We need to show everyone that City are better this season."

Toure played in six Clasicos against Real Madrid during his three years with Barcelona. The 30-year-old says the intensity and passion of the fans involved with the Manchester derby make it a different proposition to its La Liga equivalent.

"In Spain, the football is more technical and tactical, while in England things are a lot more intense. The passion the fans bring to every game is incredible and every player’s attitude is focused on winning. That mentality is always there.

"You can play for five minutes and the ball won’t go out, but the fans are still singing, even the away ones. This year’s game will be amazing. The Clasico dominates Spain, but in the Premier League there are a lot of games at that level."