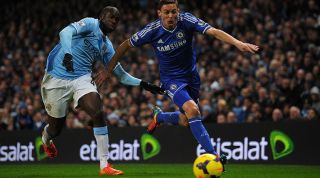 Yaya Toure has picked out Nemanja Matic as the toughest opponent he faced during his career.

The former Barcelona and Manchester City midfielder is currently playing his trade in China with Qingdao Huanghai, having left the Etihad Stadium in 2018.

Toure won two La Liga titles and the Champions League during his time at Barcelona, before helping to establish City as one of Europe's leading clubs.

The midfielder moved to Manchester in 2010 and went on to lift the Premier League trophy three times as a City player.

And it was during his time in the Premier League that he encountered Matic, who spent three and a half seasons at Chelsea before joining Manchester United in summer 2017.

“Nemanja Matic was complicated,” Toure told The Times. “He’s not quick but he’s so strong, clever. All the rest of the opponents, because I always looked at them carefully before games, I get their weakness.”

Toure was a key part of the most successful era in City’s history, scoring 79 goals in 316 appearances for the club in all competitions.

However, the ex-Ivory Coast international still believes he could have won more silverware at the Etihad – and regrets missing out on the biggest prize in European football.

“I saw the game against Atalanta, when City drew, and Kyle Walker was keeper. Unbelievable. He made a save. I don’t want to go in goal. Too difficult.”

Pep Guardiola’s side will be looking to close the gap at the top when they host Chelsea this weekend.

Are Italy back? How Roberto Mancini helped the Azzurri recover from their World Cup embarrassment