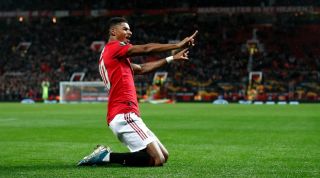 Stories that Barcelona wanted Marcus Rashford in April were laughed off by many Manchester United fans. Every United player was performing poorly, including the Mancunian striker, and some fans couldn’t understand why the Catalans would choose him to play alongside Lionel Messi.

Fans are often harder on their own and the interest was genuine. Barça felt that he was young enough to be coached into their style, as well as fast, skilful and capable of playing anywhere across the front three. Rashford’s representatives spoke with them, yet from the outset Barça knew their chances were limited. They’d already earmarked their summer funds, and they needed to cut their wage bill. They also – correctly - thought that United wouldn’t entertain selling Rashford.

When a legendary United player found himself sitting next to Pep Guardiola at a dinner a year ago, Manchester City’s manager told him that Rashford was the only United player he’d like at the Etihad.

Guardiola, perhaps, is a better judge of a player than Rashford’s many critics.

Rashford signed a new deal earlier this year, he started his fifth season in United’s first team and he’s starting to shine in a poor side, with nine goals and three assists for his club in the first three months of the season. An achievement put into perspective when you consider that United didn’t score more than once in 12 games after the opening day. Vardy, Abraham, Aguero, Aubameyang, Mane and Sterling have all scored more, though none have made as many assists. And none quite as exquisite as his backheel for fit-again Anthony Martial at Norwich.

With Romelu Lukaku sold and Martial injured, the demands on Rashford have increased. Mason Greenwood is a highly promising striker, but he’s 18.

Paul Pogba is the main man in United’s dressing room, the man who Martial looks up to. But Greenwood should watch and learn from Rashford’s attitude and professionalism over any other member of that dressing room.

Yet Louis Saha had a point last week when he told me: “Maybe Greenwood has arrived six months or one year early and that’s not fair for him. He can’t be the only threat for Martial and Rashford at a big club like United. I had to compete with Ole Gunnar Solskjaer, Van Nistelrooy, Cristiano and Wayne Rooney. Greenwood is learning from two youngsters rather than two experienced players.”

Marcus Rashford has been involved in 11 goals in 10 games.

Rashford can be moody when things aren’t going well, but he’s a young lad who has had to deal with three managers and an ever-rotating and underperforming cast around him up front. No easing into a stable environment as would have happened in Sir Alex Ferguson’s day.

Ferguson is a Rashford fan, and Solskjaer is too. His immediate career path is clear and he’s started every United league game so far this term.

His country also needs him. Sunday’s superbly taken goal for England in Kosovo boosts his total to 16 goals and assists so far this season for club and country. He’s in a sweet spot and his combined total is impressive and prolific – not a term readily used about Rashford. Paul Scholes had a point when he recently remarked: “Rashford’s all-round play has been brilliant. He’s probably a scorer of great goals rather than a great goalscorer. If Marcus lacks anything it’s a little bit of composure in front of goal.”

Great goals? His free-kick at Chelsea two weeks ago was incredible, Martial’s reaction to it incredulous. He struck a ball he’d only used in two training sessions prior to the game.

He’s sent too many over the bar this season so it was about time, but if he can score a few of those each season that’s another area United have been found lacking.

Rashford is no fast track bully, a man for the tap-ins when his team are three up. He has scored more goals against Chelsea than any other club. His second-highest number has come against Leicester City, Liverpool his third. He’s scored winners in the Manchester derby away. He had the nerve to take a last-minute penalty in Paris to knock out PSG from the Champions League. His goals need to pick up against the weaker teams, those sides who sit back rather than come out to play, not the strongest ones. But he needs a brilliant creator behind him to be even better, to play the killer balls through the lines, to find Rashford, so adept at getting behind defenders.

Maybe Rashford does currently lack some composure in front of goal, as Scholes said. He missed three good chances in the first 15 minutes at home to Partizan – but he still scored.

Maybe he’s better playing wide and cutting in than as a central striker at this stage in his career. He pushed to play more centrally a year ago but didn’t always convince when he did. With Anthony Martial back he’s likely to play more games on the left – he’s been deployed there seven times this season as against nine as a centre forward.

And he’s got time to learn. Rashford has only just turned 22. While Wayne Rooney was already one of the most exciting players in the world as a teenager, he was an exception. At the same age as Rashford, Ruud van Nistelrooy was at Heerenveen, Andy Cole was at Bristol City. Dwight Yorke played 12 league games as a winger for Aston Villa before becoming a centre forward at 24. Ole Gunnar Solskjaer was at Molde, Teddy Sheringham at Millwall. All would become legendary strikers and better players with age.

Just because Rashford enjoyed an explosive start to his United career didn’t mean that he would carry on doing that all the time, but he’s been one of United’s positive while they struggled. Despite his youth, Rashford already has 187 United appearances to his name and 54 goals. He’s from Manchester. He’s a lifelong United fan. He didn’t cost a bean and he’s getting better alongside other fleet-heeled forwards Dan James and Martial. This is no magical Ronaldo, Rooney, Tevez, Saha, Nani and Giggs forward line and there’s a strong argument for United still needing a more prolific goalscorer, but the front-line are 22, 22 and 23. There’s time and room for optimism if this trio properly click.

IN DEPTH Le Hand of God, 10 years on: Thierry Henry’s handball that sent France to the 2010 World Cup