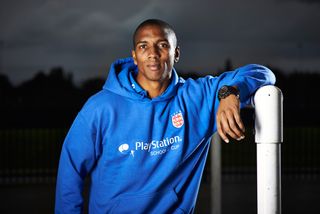 The pair have both picked up seven points from their opening four Premier League games, with City losing 3-2 at newly-promoted Cardiff City and United at table-toppers Liverpool, another of their fierce adversaries.

Both sides secured away wins in this fixture last season. Robin van Persie's last-gasp free-kick sealed a dramatic 3-2 win for United at the Etihad Stadium, before Sergio Aguero's solo effort earned a 2-1 victory for the Blues at Old Trafford.

Young has scored six goals in 47 league games for the Red Devils and experienced derby atmospheres in the past playing for Aston Villa against Birmingham City.

Speaking exclusively to FourFourTwo, the 28-year-old admitted he could feel the tension in the city as soon as he signed for last season's league champions.

"I think from the time I signed for United I could feel the rivalry. Whether that’s on the pitch or walking round the streets with fans, the rivalry is massive," he said.

Sunday's meeting may be too early in the campaign to decide where the silverware will reside come May, yet Young says any victory over United's 'noisy neighbours' is one to savour.

"With them winning the league and then us getting our title back, I think it’s going to be a massive game. I think it always is with the audience, the crowds, how many people will be watching the game.

"It’s Manchester – you want to be able to say this is our city. We know it’s not going to decide the league, but it’s one of those games that you want to win.

PlayStation’s new partnership with the English Schools’ FA has increased boys’ and girls’ football tournaments for the secondary school age categories, attracting close to 2,000 schools entries and 100,000 participants throughout England. This grassroots programme will help nurture stars of the future. Visit www.playstationschoolscup.com or www.facebook.com/playstationschoolscup for more information.