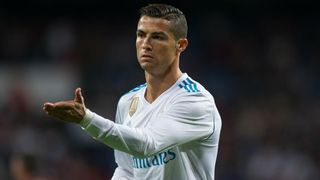 Cristiano Ronaldo has been labelled as the player of his generation by Real Madrid boss Zinedine Zidane, who has backed the forward to rediscover his goalscoring form.

Madrid's 3-0 win over Eibar on Sunday represented another frustrating appearance for Ronaldo, who has just one La Liga goal to his name this season.

Ronaldo, who netted 42 times across all competitions last term, squandered a glut of golden chances after Marco Asensio had put Madrid two up at the Santiago Bernabeu, before Marcelo capped off the win late on.

However, Zidane believes the 32-year-old, who has had no issues finding the net in the Champions League so far this season, will come good domestically.

"There's no need to worry if Cristiano does not score, the important thing is that he has chances," Zidane told reporters.

5 - Cristiano Ronaldo had as many shots (five) as the number of touches in the opposite box (five) against Eibar. Persistent. October 22, 2017

"Cristiano is the best player of his generation. He makes the differences in key matches and he deserves all the prizes he has won.

"The goals will come back little by little. We lacked fluency in this game but the important thing is that we have won and kept the clean sheet."

Madrid's victory takes them back within five points of leaders Barcelona, and one behind second-placed Valencia ahead of the trip to Girona next time out in La Liga.