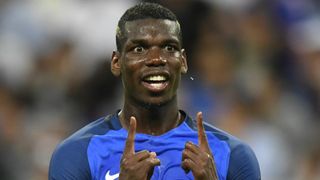 Real Madrid boss Zinedine Zidane has professed his admiration for Paul Pogba but claims it will be difficult to improve his squad with any major signings.

The European champions have long been linked with an interest in the France international, although Manchester United are reportedly in pole position to sign him should he decide to leave Juventus.

Zidane admits he is a fan of his young compatriot but has suggested that the size and strength of the squad at Santiago Bernabeu means transfers are not essential.

"I like Pogba. At the moment, he's a Juventus player. I'm happy with the squad I have and it's difficult to improve it," he said at Madrid's pre-season training camp in Canada.

"It's difficult because a big squad creates problems. But I don't dislike the idea of looking to the academy. There are a lot of competitions and we need everyone.

"Working is the most important thing, it's what we're going to do here. Then, bit by bit, we'll decide things. You don't know what will happen until August 31. We're happy with the squad we have and we've just won the Champions League."

Madrid are training in Montreal ahead of their opening International Champions Cup game against Paris Saint-Germain on July 28.