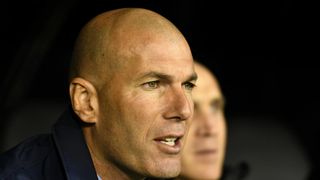 Zinedine Zidane accepted his Real Madrid contract "means nothing" as his side's troubles continued with a 2-2 home draw against second-tier Numancia in the Copa del Rey on Wednesday.

Madrid progressed 5-2 on aggregate thanks to their 3-0 first-leg win, but that victory remains the only success in their last four matches.

Numancia striker Guillermo started on the bench but came on as a first-half substitute to score a pair of equalisers and cancel out two Lucas Vazquez strikes as Zidane's men stumbled again.

Madrid were also held at home by lower-tier opposition in the last round, Fuenlabrada having taken advantage of Zidane's under-strength selection by claiming a 2-2 draw at the Santiago Bernabeu.

And with Madrid a gigantic 16 points adrift of Barcelona in LaLiga, having been held at Celta Vigo on Sunday and after last month's 3-0 thumping at home to their Clasico rivals, Zidane acknowledged his position has weakened.

"I just go game to game, year to year," said Zidane, who agreed a new Madrid deal in September.

"I cannot think two or three years down the line, as I know how it is here, even having a contract, which means nothing.

"It is not easy for the players who play less. We played a good game. We maybe lacked a bit of gas at the end."

Two goals from helped us progress to the quarter-finals of the Copa del Rey. Check out some of the best photos of the night... | January 10, 2018

Vazquez's first double in 109 appearances for the club was a rare bright spark in another game where Madrid lacked cohesion, purpose and energy.

But Zidane, who made 10 changes from the 2-2 draw in Vigo when they gave up another lead, claimed to be satisfied with the performance of his young team, with Cristiano Ronaldo, Gareth Bale and Luka Modric among the stars left out.

"I am happy with what the players did," Zidane added.

"The pity is the goal before half-time, and also a goal at the end. But apart from that we had a good game, and they did what they had to do.

"For me, we are recovering things and we will [recover] with my players and staying relaxed, without problems.

"All the questions, things you think about bad play or whatever, it could be. But we are convinced we will move forward.

"I am happy with those who played. I am satisfied across the two games, and the players are too."