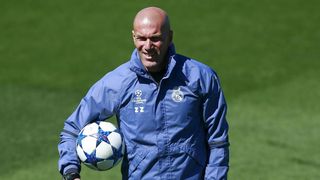 Zinedine Zidane is wary of the threat posed by Atletico Madrid in the Champions League semi-final, noting that Real Madrid have been conceding too many goals of late.

Madrid have kept just one clean sheet in their last 16 matches in all competitions, although they have won 12 of their last 15 games heading into Tuesday's first leg at the Santiago Bernabeu.

With Pepe and Raphael Varane recently unavailable due to injury, Zidane's defensive options have been restricted to Nacho and captain Sergio Ramos, and the coach accepted Madrid have not been strong enough at the back.

"I don't think we're conceding cheap goals but it is true that we are conceding more goals," Zidane told reporters on Monday. "We are not keeping as many clean sheets as last season.

"We just have to work a bit harder to try and keep it tight and not concede, but it is impossible to guarantee a clean sheet. A team comes and plays and creates chances, you have to give the opponents credit too.

"When you play in the league the focus is to score one more than your opponent to win the game but in a two-legged tie you have to be careful about the away goals.

"It's a game we have to focus on - one game at a time, not look ahead - and play well from the first to the 90th minute. Our fans I know will be there, we want them to get right behind the side.

"We saw against Valencia how they can help us to win so it's a plus to have them there. It's a semi-final and we know what we have to do but the fans have an important role to play too."

Casemiro - who has been booked in three of his last four Madrid appearances - was arguably fortunate not to be dismissed in the quarter-final against Bayern Munich but Zidane defended the Brazilian's combative style of play and the Frenchman said he will not specifically prepare for the prospect of his side being shown a red card.

"You don't train [to play with 10] but you tell the players there is a possibility," Zidane added. "Against Barcelona we were down to 10 men and we had a player [Ramos] sent off.

"Our opponents, Bayern Munich, had a player sent off. It can happen and we have to be ready, pack the midfield and make sure the team is in good shape.

"I won't tell Casemiro to change how he plays, as he has been perfect so far. He got a yellow card after 10 minutes the other day. If he can escape a booking, then he will try to."