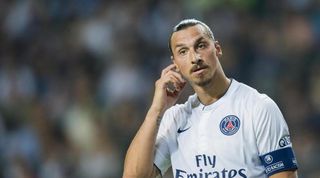 The Paris Saint-Germain striker has not played since a 1-1 draw with Lyon on September 21 due to the issue, missing four games for his club.

However, he was still named in Sweden's squad for back-to-back qualifiers with Russia and Liechtenstein.

Ibrahimovic and team doctor Leif Sward suggested on Wednesday that he would not feature in Thursday's match, but the 33-year-old has now been named among Sweden's substitutes.

"There are no major signs of inflammation, but he feels some pain," Sward had told L'Equipe. "We do not want to artificially accelerate the recovery, because the Achilles tendon could be damaged.

"Zlatan is getting better and better, but even with minimal inflammation he will not play."

Ibrahimovic's inclusion in Sweden's matchday squad for the fixture in Solna suggests he has made good progress, something that will please those back in Paris.

Laurent Blanc's men face Lens in Ligue 1 on October 17 before their next UEFA Champions League match against APOEL the following Tuesday.