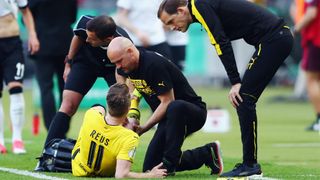 Marco Reus should stay at Borussia Dortmund because the familiar environment will be important in helping him rediscover his best form, according to the club's sporting director Michael Zorc.

Reus cast doubt over his future at Dortmund when he revealed he was thinking about how best to continue his career.

The Germany international has not played since suffering knee ligament damage in May and has now entered the final 18 months of his contract with the club.

Injuries have plagued Reus over the last three years, but he remains a player Dortmund are keen to keep.

And Zorc believes staying put would be in the 28-year-old's best interest, with a return to fitness on the horizon.

"It's perfectly normal for a player of his age to think about his career and think about possibly taking another step," Zorc told Ruhr Nachrichten.

"On the other hand, he knows what he has at Dortmund and he would be here in his usual environment. That's important for him, I think, to get to his top performance [level].

"We would be happy if we could continue to plan with Marco. He is Dortmund – he has a high identification with the club and the city. We will certainly hold the appropriate discussions in the near future."

One player whose future is less certain is Alexander Isak, who arrived to much fanfare in January 2017 and has struggled to make an impact.

Dortmund reportedly beat a host of big clubs to the reported €8.6million signing of the Sweden youth international, but Zorc concedes it is difficult for the 18-year-old to make an impact in the shadow of Pierre-Emerick Aubameyang.

"It is difficult for him," Zorc said. "Aubameyang - so much for his perceived lack of professionalism, by the way - is rarely injured and has the power, even for 90 minutes.

"We look at the situation and discuss with his advisors what would be best, but we do that regularly with every player."