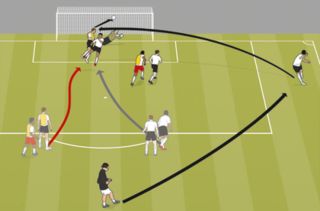 Build up that engine

“To get into dangerous positions and work for the team defensively you need to be fit and strong physically. You also have to be tactically aware of the system you’re playing in. You won’t be able to get yourself in these positions if you’re not fit enough to be all over the pitch. When you get into the penalty box you’re always going to be marked with a player pulling your shirt – and they’re probably going to get away with it – so you need good movement and strength in order to win the duel.”

“To be a threat in the box you need to work on finishing and develop a smell for the situation so that you can sense when an opportunity is about to present itself. For example, when you see your winger shaping to cross, lose your marker with different movements – for example, feign to go short and then dart to the back post. And when you do find yourself in a scoring position, don’t think too much. The more you train, the more comfortable you get. Eventually you will develop an automatic rhythm so you don’t have to think.”

“My managers would tell me where they wanted me to be when we were on the attack so I would simulate these scenarios in training. I knew exactly what positions to be in and how I was going to react when the ball came to me. First touch is very important, but you never receive the ball exactly as you’d like to in a game. In training, practise receiving the ball in different situations – bouncing, on the floor, overhit. The first touch is really important if you want to apply a quick, accurate finish.”

“You can sharpen your finishing in training by simulating scenarios that happen in a match.

A game is much quicker than training because your team-mates will not defend as hard as your opponents will and in the match you’re tired and don’t have much time, which is why it’s crucial to train at a high pace.

It’s the quality of training that’s important. I always liked drills that involved competition and finishing from crosses.

This drill is one of my favourites. The coach divides up the players into pairs and instructs them to line up outside the 18-yard box.

Then he positions wingers out wide on either channel. The drill starts with the coach passing the ball out to one of the wingers, who has to cross the ball into the box.

As the coach plays the pass, two sets of pairs run into the box and compete against each other to score.

The team that scores stays on; the team that loses joins the back of the line. Then the next team competes against the pair who won the previous round.

The winning team stays on. It’s always more competitive if you fight against your team-mates. I enjoyed exercises like this because it involved scoring.

During a game you are thinking about tactics and you’re fighting, but when you score it’s the greatest feeling."

For more football tips see:
Train hard, finish easy
Michael Ballack: How to be the complete midfielder
Shoot like Frank Lampard
Frank Lampard: Be first to the ball
Gus Poyet: Score from midfield
Time your run into the box