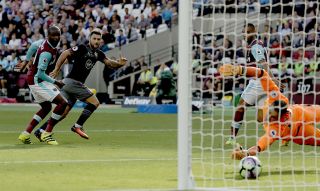 Don’t be afraid to miss

“There’s no substitute for hard work, but as a striker who has moved from non-league football to the Championship via League One in a relatively short space of time, I’ve always gone on to my next challenge without really knowing if I was good enough to make the jump. In some ways that has helped because I’ve just kept on doing what made me successful in the first place – which is not being afraid to get in goalscoring positions and take my chances.”

“Confidence is a massively important part of a striker’s armoury, which I really showed at Burnley this season. If you can get a good pre-season, feel sharp and hit the ground running, it can make a massive difference. You really need to go at it from the off because even if one goes in off your backside, you’re up and running.”

Learn from those around you

“When I went to Swindon I worked with Billy Paynter who was a lot more experienced striker than me at the time. If you have someone who has been there and done it then you can pick up a lot from them. As a pro you’re lucky to be able to spend more time working on these things, but the same principles hold good in amateur football – you can still learn from experienced players around you.”

“It’s important to focus on what you do well and not lose sight of what makes you a good footballer. It’s easy to complicate things when football, really, is a pretty simple game. As a striker it’s your job to stick the ball in the back of the net so make sure you give yourself every chance to do it. You’re not going to score goals if you’re not prepared to get in the box and throw yourself about.”

“If you’re not careful you can sometimes lose sight of what made you start playing football in the first place. Last season, after a bit of lean spell, [Burnley manager] Sean Dyche told me to go out there and play like I was 10 years old. ‘You never worried about anything then so go out there and play with the same freedom,’ he said. That’s something I now try and take out with me every weekend. He told me that before the Charlton game back in March and I ended up scoring a 25-yarder in a 1-0 win. Without that I’m not sure I would have even had a crack at goal from that far out.”

Recommended for you:
Jermain Defoe's six-step guide to striking
Darren Bent: How to be a maestro of movement
Demba Ba: Hit the target every time
Rickie Lambert: How to hit the back of the net