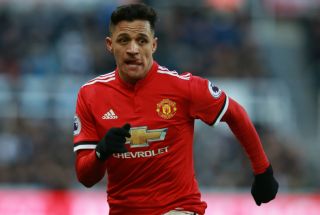 The secret to peak performance? “I don’t like to go out a lot,” says Sanchez. “I prefer to be at home and watch movies.”

Start in a lunge position, your back knee an inch from the floor. Fully extend arms forward, while holding a medicine ball. Return to the start position and repeat. The aim is to stabilise and strengthen the lower body while moving the upper body to fend off an opponent.

The amount Sanchez says he matured at the 2010 World Cup. “I was liberated,” he said. A year later, he left Udinese for Barcelona.

Fox in the box

The stats suggest Arsenal have finally found a genuine poacher. Sanchez scored 16 of his 19 La Liga goals in his final season came from inside the box and his conversion rate (29 per cent) was better than Messi’s and Ronaldo’s.

“I remember him trying to master Ronaldinho’s flip-flap trick,” recalled Chilean journalist Jaime Cortes. “He tried it in training all the time. Eventually he mastered it.”

Set-up Stand in final third on the right wing with your back to goal. Position a server on edge of centre circle and a defender behind you.

Action Receiving the ball firmly to feet, turn infield with your first touch using either foot. Accelerate towards the box, where a second defender awaits. Feint to go one way, then go the other. Shoot. Repeat on other wing.

For more football tips see:
Radamel Falcao: How to be a penalty-box predator
Thierry Henry: Finishing at speed
Wayne Rooney's shooting drill
Olivier Giroud: How to create and conquer
Rooney: Big match preparation
Ibrahimovic: How to play as a targetman