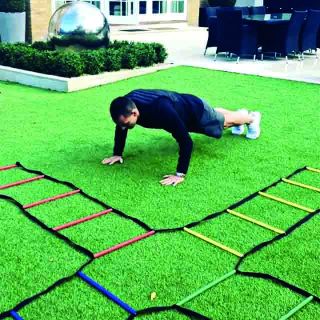 After Theo Walcott was left out of England’s Euro 2016 squad, he responded by hiring a fitness coach to get him in the shape of his life ahead of the new season.

Walcott has since started the season with a bang, finding the back of the net eight times already – just four short of his tally for the whole of last term.

We caught up with Simmonds – who played for QPR before injury brought a premature end to his own football career - to find out exactly how he’s been putting him through his paces.

Hi Bradley, how did your link up with Walcott materialise?

I’ve been training John Terry and his wife for about 18 months now and I think Theo had seen my training videos with him on Instagram. He started following me on there in May and then sent me a message asking me to train him. It’s amazing how powerful Instagram and social media is.

Which areas of fitness did he want to focus on?

Well, he hadn’t been picked for England’s Euro 2016 squad and so he wanted to do some extra work to get in great shape ahead of pre-season. He wanted to get really sharp, improve his core and upper body strength and strengthen his glutes. I gave him a programme to follow during the off-season and did sessions with him at his house.

How often do you train him?

During the off season we were training very often, but obviously he now has games and training all through the week, so we do a session a week and he also has a programme to follow that I’ve given him. After training he’ll go to the gym, do a few core exercises, and then once a week I’ll push him and really try to improve his core and upper body strength.

Can you talk us through a typical session with Walcott?

We always start with a fast walk or a jog for five minutes to get his heart rate up and also a few mobility exercises to prepare him for the hard training. Core strength is really important for Theo’s game because he does a lot of twisting and turning at speed, so we do exercises that target this area.

The first exercise we’ll do is bodyweight planks, which he’ll hold for two minutes. Then we increase the difficulty with weighted planks. – he’ll have a 20kg plate on his back, before moving on to the TRX cables, which are a great tool to isolate the core muscles.

What sort of exercises does he do for his upper body?

Different variations of press-ups. You have wide press-ups, a diamond press-up, you can add a weight on his back and use TRX. When you do press-ups with a TRX, it makes it slightly harder and really works your core. We also do wide pull-ups for his back – mainly all bodyweight exercises.

Do you do work to strengthen his lower body?

Because his legs are so exhausted from his football, the last thing I want to do is add to that fatigue. To avoid that we do lots of slow, controlled movements, for example weighted lunges, to target the glutes and hamstrings. Theo’s had a few hamstring injuries in the past so we have tried to strengthen his glutes to avoid those injuries.

Is it a balancing act getting him stronger, while maintaining his speed?

Yeah, that’s one thing I’ve learnt from my own experience. I tore my ACL [anterior cruciate knee ligament] and then I started hitting the weights hard and going on the bench press every day. I came back so stiff and heavy.

Theo is fast, so it’s important we don’t lose that pace. That’s why we do lots of body weight stuff and exercises using low weights and high repetitions. I don’t want him to look like a rugby player. It’s the same with John Terry – Premier League strikers are very quick and agile – he needs to be able move well.

We see so many players doing extra training sessions on Instagram – do you think you have to do extra work now to become a top player?

I really do, I think it really started with [Cristiano] Ronaldo. Everyone has seen how hard he’s worked and what he’s gone on to achieve and they want the same. When you look at Theo, he’s put in the extra work and had a wonderful start to the season.

It doesn’t just help with your physical state; I think it helps your mentality and confidence as well. If you know you’ve done that extra work, it puts you in a good mindset.

Theo isn’t thinking about his next game when he’s with me, he’s thinking about the training, so it’s a good distraction as well. I was speaking to John Terry about it and he said it really helps his mindset when he knows he’s got the extra work in the bank, particularly when he’s been out injured.