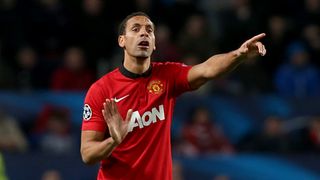 “I played in midfield as a kid so going back into defence, I was always relaxed on the ball. If you show panic when the ball comes to you, that panics your team-mates. It’s good to stay as calm as you can and just pass the ball to a player on your team. Body language goes a long way. If you can make people around you feel more confident and relaxed, then your team has got a better chance of winning.”

“When the ball comes to you, you’ve got to have a picture in your head of what’s around you. You have to know where players are on the pitch – not just because that’s the way the team plays, but if the ball comes to you and you haven’t got an idea of where your midfielders, full-backs or forwards are, then where are you going to pass it? When the ball comes to me, I like to know in my head where the next pass is going to be. Someone like Scholesy probably knows a couple of passes ahead of everyone else."

Get your head up

“Sometimes the ball comes to you and your head goes down – that’s a trigger for the forward to put pressure on you. You get your head back up and he’s two yards away from you. When the ball is coming to you, get your head up and look around at where people are moving. By the time the ball gets to me  I know whether I have time to take a touch or whether I have to release it first time. The picture has changed when you’ve got your head back up and you’ve got to be adaptable to that picture.”

All eyes on the enemy

“When there’s a ball over the top and you’re chasing it down facing your own goal, you’ve got to work out where their player who is applying the pressure is. If he’s goalkeeper-side, sometimes I feint to play it to the keeper and he’ll take a step or two towards the keeper, which gives me another yard when I come back the other way. Then I’ve got an extra second on the ball to pick out a pass. The person who is chasing me makes my mind up as to where I’m going to play the ball.”

“If you’re playing against a really quick, skilfull player, make sure you’re within touching distance on his first touch. If you let him get into his stride and start running at you, you’re in trouble with someone like that. On the other hand, you get a physical striker who loves contact. So try to do different things to get him off his game that he’s not used to. People that are big and physical are not as good if they haven’t got contact with you – if they can’t back into you they don’t know where you are. Try to keep them guessing.”

“If you’re marking a player at a set-piece, the best thing you can do is be touch-tight. You can’t hold shirts and stuff like that, but as the ball is coming, you can nudge them when they’re running and get them slightly off balance. If you let someone who is good in the air get a run on you and you’re standing there waiting for the ball, you’re never going to win. It’s important that you go toe-to-toe with them and wherever they run, you run and attack the ball.”

As part of Nike’s The Chance – a global search for young talent – Rio has helped toughen up the four UK finalists ahead of the world finals held in London from 19th – 22nd January. Rio enlisted James Milner, Ashley Cole and Aaron Lennon to help ‘mentor’ the lads. One hundred players will take part in The Chance finals and eight will be selected to play for the Nike Academy full time from next season. To follow the UK players at the finals visitwww.facebook.com/nikefootball

For more football tips see:
Rio Ferdinand's Ultimate Defender
Sylvain Distin: Dominate your opponent
Franco Baresi: How to defend like a master
Chris Smalling: How to be the complete defender
Nemanja Vidic: Tackle any threat
Ashley Cole: How to handle every opponent