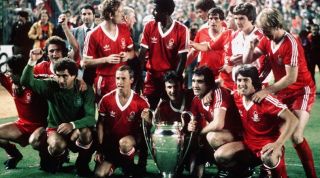 The first five editions of the European Cup were all won by Real Madrid, who will be looking to claim their 12th title in Cardiff on Saturday. It's impossible not to admireLos Blancos’incredible consistency between 1955 and 1960, although it's also hard not to wonder whether their progress would have been checked by Manchester United had tragedy not struck in the form of the Munich air disaster in 1958.

Either way, these Madrid teams were always packed full of talent: Alfredo Di Stefano and Ferenc Puskas were the undisputed stars, but Francisco Gento, Raymond Kopa and Hector Rial could all play a bit too. Their remarkable record of five successes in a row will surely never be beaten.

Madrid’s baton was passed to Benfica at the turn of the decade, as Bela Guttmann wrote his name into the history books by guiding the Portuguese club to successive triumphs.

Holders Madrid were knocked out in the first round of the 1961 competition by Barcelona, who provided the opposition as Benfica ran out 3-2 winners in the final in Bern.

In the showpiece event 12 months later, Eusebio, Mario Coluna, Jose Aguas et al. beat Madrid 5-3 in one of the most entertaining games in the history of the European Cup. Benfica were certainly easy on the eye, and they regularly had too much attacking quality for the best of the rest on the continent.

Benfica were unable to defend their title in 1962/63, when a brace from Jose Altafini helped Milan defeat the Eagles in the final. It was theRossoneri’s city rivals Inter who became the next side to win the European Cup in consecutive campaigns, though, as catenaccio – the most notorious tactic in the history of the game – enjoyed its moment in the sun. The style of football may not have been to everyone’s taste, but Helenio Herrera’s men were undoubtedly masters of their craft.

A 3-1 win against Real Madrid in the 1964 final served as a riposte to those who dismissed Inter as overwhelmingly defensive. The Serie A side did an excellent job of nullifying their gifted opponents, but they also committed bodies forward on the counter-attack and were good value for their victory.

A thrilling comeback in the second leg of their semi-final clash with Liverpool saw Inter book their place in the final in 1965, with Jair da Costa’s first-half effort ultimately settling the decider against Benfica in their favour.

“You play football with your head,” Johan Cruyff once said. “And your legs are there to help you.”

The Ajax side of the early 70s were certainly cerebral, and it was their conception of the game that won them so many admirers. Their execution of it wasn’t bad, either: each member of the team was well versed in the various facets of Total Football, which revolved around short passing, pressing, a high defensive line and the constant rotation of positions.

Ajax eased past Panathinaikos in the 1971 final, before twice defeating Italian opposition to retain the trophy in 1972 (Inter) and 1973 (Juventus). Cruyff’s sale to Barcelona the subsequent summer brought the Eredivisie outfit’s reign to an end, as Ajax crashed out in the second round in 1973/74.

Ajax’s hat-trick was followed by one from Bayern Munich, who came out on top from 1974 to 1976. They required a replay to get past Atletico Madrid in the first of their three finals, beating the Spaniards 4-0 after an initial 1-1 draw, before seeing off Leeds and Saint-Etienne for numberszweianddrei.

With Gerd Muller’s poaching, Sepp Maier’s shot-stopping and Franz Beckenbauer’s all-round brilliance, Bayern consistently proved too strong for the rest of the continent, although their preoccupation with Europe did contribute to an unprecedented 10th-place finish in the Bundesliga in 1974/75.

Liverpool became the first English club to win the European Cup two seasons in a row when they beat Club Brugge by a Kenny Dalglish goal to nil at Wembley in 1978. The signing of the Scot the previous summer was a key reason behind the Reds’ retention of the prize, particularly as Kevin Keegan had left for Hamburg in the same transfer window – but not before he’d helped Bob Paisley’s side to a 3-1 victory over Borussia Monchengladbach in the 1977 final.

Paisley added a third European Cup to his collection in 1981; Carlo Ancelotti is the only manager to have won the tournament as often.

“For all his horses, knighthoods and championships, he hasn't got two of what I've got,” Brian Clough once said of Sir Alex Ferguson. “And I don't mean balls.”

Fergie, of course, would go on to secure his second continental crown in Moscow in 2008, but the former Manchester United manager was never able to win the tournament in back-to-back campaigns. Clough did exactly that at Nottingham Forest in 1979 and 1980, as 1-0 victories over Malmo and Hamburg made the previously unfashionable East Midlanders kings of the continent.

The latter triumph proved to be the pinnacle for Forest, who had to content themselves with just a pair of League Cups in Clough’s final 13 years in charge. Still, as followers of the current side would attest, it could have been far worse.

The 12 best players never to win the Champions League

Where are they now? Liverpool's 2005 Champions League winners

The last side to successfully defend the European Cup remain one of the best to have ever graced the tournament. Arrigo Sacchi’s charges, who counted Franco Baresi, Marco van Basten, Ruud Gullit, Frank Rijkaard and a young Paolo Maldini among their number, swept all before them in 1989 and 1990, with the rest of Europe having no answer to their zonal marking system, compact 4-4-2 formation and coordinated pressing game.

Milan were at their best in 1988/89 – the highlight was a 5-0 thrashing of Real Madrid in the semi-final second leg at San Siro – but their record of seven clean sheets in nine games the following season was perhaps theRossoneri’smost impressive feat.