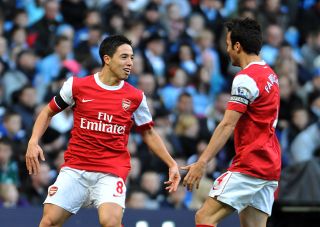 Arsenal's move to the Emirates Stadium in the summer of 2006 meant many changes , with the wider availability of tickets and increased commercial revenue supposedly giving the club more chance of long-term success. But it also had some negative short-term consequences - chiefly because Arsene Wenger was unable to sign players of a certain calibre, and was instead forced to concentrate on promoting youth.

"I thought: We are building a stadium, so I will get young players in early so I do not find myself exposed on the transfer market without the money to compete with the others," Wenger outlined, in an interview with the Daily Mail in 2009. "I build a team, and we compensate by creating a style of play, by creating a culture at the club - the people you meet at college from 16 to 20, often those are the relationships in life that keep going. That, I think, will give us strength that other clubs will not have."

Nowhere was this policy more evident than in the midfield. When Arsenal moved to the Emirates, Denilson and Alex Song were 18, Cesc Fabregas was 19, Abou Diaby was 20, Mathieu Flamini was 22. These players were the epitome of Wenger's belief. Each offered something different: Denilson was a relaxed passer, Song a sturdy holding midfielder, Fabregas a classic Spanish playmaker, Diaby a powerful forward runner, and Flamini a scrappy defensive midfielder. Meanwhile, 29-year-old Gilberto Silva would provide the experience.

The problem with Wenger's attempted cohesion was the lack of consistency from season to season. Players came and went, and it was impossible for all five to be successful at Arsenal. Perhaps Wenger would argue his footballing philosophy was so overarching that literal connections between specific individuals were unnecessary, but the fact remains: since Arsenal's stadium move, Wenger's first-choice midfield combination has changed every season.

In the first year of the Emirates, it was simple - Gilberto and Fabregas played in the centre of the pitch. They'd been together the previous season following the departure of Patrick Vieira, and helped Arsenal to the Champions League final. Gilberto sat and broke up play, while Fabregas shuttled forward from a deep-lying midfield position to create.

The Spaniard was clearly the heartbeat of the side, but equally crucial was Gilberto's contribution, evident from the first game of the season: when Arsenal looked set to lose their Emirates debut, Gilberto snatched an equaliser. In the first North London derby against Tottenham at the Emirates, Gilberto slotted home two penalties. He became a genuine goal threat, managing double figures in the league, and with Thierry Henry out injured, wore the captain's armband.

BEHIND THE SCENES FourFourTwo spends a month with Arsene, Ivan & Co.

Gilberto and Fabregas looked set to continue as Arsenal's first-choice combination, but in the summer of 2007, Wenger fell out of love with the Brazilian. Gilberto had captained Brazil to the 2007 Copa America (although he missed the final through suspension), underlining his leadership skills, but William Gallas was named as Henry's permanent replacement. Meanwhile, by the time Gilberto reached full fitness, Matthieu Flamini had taken his place in the side.

Gilberto left at the end of the campaign, but that didn't matter, for Flamini and Fabregas was now Arsenal's favoured midfield partnership - the Frenchman had previously appeared a scrappy utility player, most impressive in the 2005/06 Champions League run in an unfamiliar left-back role. Given a chance in midfield, he was a revelation - he was more all-action than Gilberto, and it brought the best out of Fabregas, who became an assist machine and won the PFA Young Player of the Year award. Flamini and Fabregas appeared to be the way forward. "They are very mobile going forward and are technically very good," Wenger stated at the time. "Before we had players more with impact, now their strength is more about ability."

Except it wasn't - Flamini's decision to leave for Milan was hardly a shock, but left Arsenal unprepared. Xabi Alonso was linked with a move - at a time when Rafael Benitez was trying to replace him in the Liverpool midfield with Gareth Barry - but nothing materialised and instead, it was Denilson's time to step up. Arsenal fans were sceptical, but Wenger was insistent. "Denilson has different qualities to Flamini," he admitted. "But if you look at the numbers at the end of the season, you will see he is a very good player."

Although it might seem odd now - Denilson has been loaned back to Sao Paulo with seemingly no future at Arsenal - he was excellent in the 2008/09 season. He was more of a natural passer than a holding midfielder, but adapted his game admirably to cover for Fabregas' darts forward. And how about those numbers Wenger spoke of? He started in 36 of the 38 league matches, and was the league leader in terms of both passing, and winning possession.

Midway through the campaign, Fabregas became injured. Denilson remained in midfield, alongside Diaby or Song, and it worked. Arsenal hadn't lost in the twelve league games Fabregas missed, so Wenger was reluctant to change the defensive base of the side. The problem was in the final third - Arsenal went on a run of four consecutive 0-0 league draws, and so Fabregas' creativity was used higher up the pitch.

Arsenal switched to a midfield three, with Denilson and Song behind Fabregas, who returned in April with two goals and five assists in his first four matches in his new role. "In this part of the pitch, I can do dangerous things in terms of giving the final ball, and I have more time to go to dangerous positions to score a goal as well," Fabregas said, and it became his permanent position. It wasn't the plan at the start of the season, but Arsenal now played three central midfielders.

In was only natural that this format continued into 2009/10: Song sat deep, Denilson spread the play wide (or Diaby could come into the side to provide more thrust) and Fabregas created from high up. In that campaign, Wenger came closer than ever to finding the right balance in the centre - the players had cohesion, but also filled different roles.

This was the Wenger grand plan: all four midfielders had been at the club since their teenage years, had all been part of that original five (Flamini was the only one who had left), with another youngster, Aaron Ramsey, impressing before his infamous injury at Stoke. Arsenal's midfield was as cohesive as any in the league, the problem was simply upfront - with Robin van Persie injured for the majority of the campaign, neither Andrei Arshavin nor Nicklas Bendtner could provide goals consistently.

In 2010 there was another reason for optimism - Jack Wilshere. He took the place of Denilson or Diaby, fielded alongside Song in a "double pivot' that seemed inspired by the German World Cup side of 2010 - rather than sitting deep permanently, Song could switch positions with Wilshere and join the attack, although Fabregas' near-constant injuries made it difficult for Arsenal to find cohesion.

But in the summer of 2011, the plan started to unravel. Fabregas finally left for Barcelona after years of speculation, Denilson was discarded, Wilshere picked up an injury that was see him sidelined for over a year and Diaby didn't manage a single start. Samir Nasri, supposedly Fabregas' replacement in the centre, fled to Manchester City.

2011/12 was, by a distance, Arsenal's most disorganised season in central midfield. Mikel Arteta was seen as something of a panic buy, although performed exceptionally; the returning Ramsey started the season well but was exhausted by Christmas; Tomas Rosicky also returned and made some key contributions; while on-loan Yossi Benayoun made sporadic appearances at the top of the triangle. Tactically, the midfield changed again - Song became even more of a playmaker, contributing a staggering number of assists for Robin van Persie, but often neglecting his defensive duties.

In the summer, Song followed Fabregas to Barelona, so Wenger has played either Wilshere or Diaby alongside Arteta. On paper, the trio of Arteta, Wilshere and Santi Cazorla looks fantastic; Arteta passes from deep and can scrap in midfield too, Wilshere provides quick transitions from defence to attack, while Cazorla thrives between the lines.

But so far, the understanding isn't there. Before this season, Arteta hadn't played with Wilshere, and he hadn't started a game with Diaby. And of course, none of them had started with Cazorla. It's not necessarily a barrier to success, but it's the opposite of Wenger's vision. He wanted to keep together a group of players from their teenage years to the first team - Arsenal's current midfielders, alas, are relative strangers.

The January 2013 issue of FourFourTwo goes behind the scenes at Arsenal, speaking to the men that matter as they reveal their master plan for success at home and abroad, including Arsene Wenger, Ivan Gazidis, Thomas Vermaelen, Santi Cazorla, Kieran Gibbs, Ken Friar, OBE and Liam Brady. Subscribe! or download it digitally