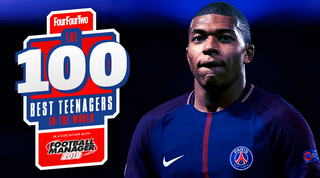 If you hadn't already noticed, FourFourTwo.com are teaming up with the fine folks at Football Manager this week to deliver our list of the 100 Best Teenagers* in the World 2017.

In the lead-up to Football Manager 2018's big release on Friday, we'll be rolling out the 100 every day until then – and beginning the top 10 reveal from Thursday.

But who makes the cut? Well, you'll have to come back throughout the week to find out exactly, but it's worth noting how we got to where we did.

We're sure you're perfectly aware of Football Manager's ludicrously big database of players – one that's used by figures within the game and not just keen gamers around the world – but perhaps not how they assemble their data each year. There's more detail about that here from our chat with FM research assistant Stephen Davidson, but TL;DR: there are more than 1,100 scouts around the globe watching hours of football at various levels, then reporting back.

And that, in short, has formed the basis for our 100. Each teenager who makes the cut is among Football Manager 2018's best for either current ability or potential – or terrifyingly in many cases, both. World, beware.

Head back to FourFourTwo.com throughout the week to find out the full list, then tell us what you think on social media (here on Facebook, @FourFourTwo on Twitter).

*Teenagers as of w/b October 23, when we began compiling this list. You'll note the odd 20-year-old here – but we're sure you'll agree they justify their selections.